Laid back Laurel and Ashley look forward to the wedding, however, at Victoria cottage, Nicola and Harriet are hung-over and Harriet guiltily panics as Ben the vicar is so hungover he is in no state to conduct a wedding. Harriet denies to Kerry she wants to sabotage Ashley’s wedding and Kerry suggests she call the bishop to see if she can marry them instead. In the church, Harriet puts on a brave face as she prepares to marry Ashley and Laurel. But will it all go to plan and be a fabulous day to remember?

Aaron tells Robert about Sandra going to the police and feels things might be going his way at last. However, Robert's suspicious of Liv asking him questions. Sandra and Chas arrive back from the station and Liv sees Chas' hostility towards Robert as she slips out. Later, Liv meets Gordon. Will she betray her brother?

Chrissie and Andy can't keep their hands off each other. Rhona worries she and Paddy will never manage to fix things. 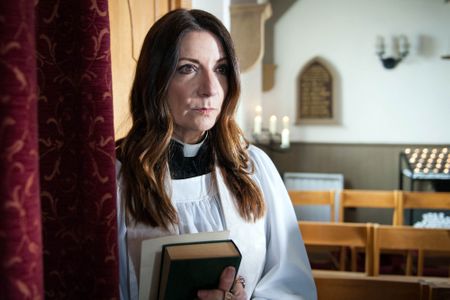