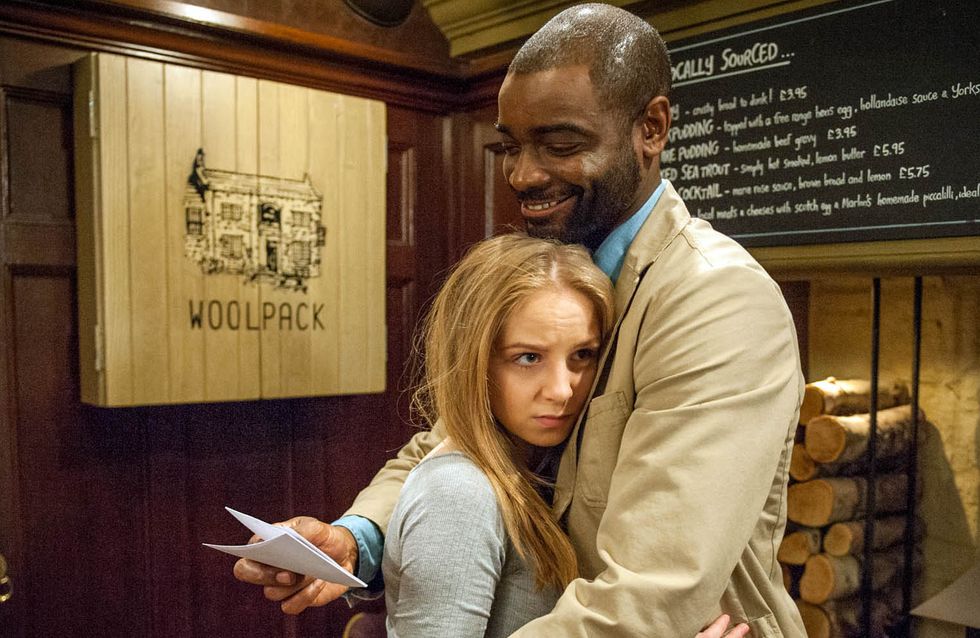 Bailey meets with Angie, expecting to split everything evenly, but Angie insists he should give her everything. Belle shows up, interrupting. She tells Bailey her scan was brought forward and he’s upset she went without him. He eventually hugs her, however, overjoyed as she reveals a picture of a scan. In the Woolpack toilets, Angie is shocked to overhear Belle talking to Ellie about the fake pregnancy, what will she do?

Bob wants to know why Carly isn’t looking after April any more.Carly invites Vanessa on a night out to get over Marlon. Later at Dale View, Carly flirts withPete as they wait for Ross and the taxi. Vanessa feels like the third wheel.ALSO: Moira tells Cain not to throw everything away, making him think there’s still a chancefor them. Robert breaks into Home Farm and steals a photo of Lachlan with his Dad

Angie tells the Dingles and Bailey what she heard in the toilets.Ellie urges Belle to run and she rushes out. Bailey discovers the scan Belle showed him is Charity’s and is gutted the baby’s not real. The Dingles realise Belle’s ill again and they desperately search for her but she has fled.

At a hotel, Charity is miffed when she gets a text from Cain cancelling; unaware it’s because of Belle. She flirts with one of the tech investors,Jared, asking to go up to his room. Charity cries wolf by calling Cain and telling him someone is holding her against her will and he rescues her. How will Cain react when he find she has conned him?

Lachlan’s overwhelmed to get another fake message from his dad with the picture Robert found on it. Carly feels for Marlon when she hears about Belle but agrees to go for a drink with Pete.​​​​