Emmerdale 19/01 – It's a rollercoaster of emotions for Charity

A nervous Charity heads into court as they prepare to open her case and feels the pressure as the Prosecution present her case to the Jury. Later that afternoon, Charity arrives home and defiantly toasts her trial, which rattles Ali. Soon Ali tells a shocked Sam that her sister Rachel could even be dead because of what Charity did. A torn Sam later confronts Charity, who is thrown by his change of attitude and left uneasy when Sam makes no promises about backing her up at her trial. Later, Charity is scared to arrive at a realisation about her feelings towards Cain.

Val is impressed with how Tracy deals with a difficult customer, suggesting there may be more work for her after all. Later, Tracy arrives with the money she owes the Dingles. A torn Sam is left further confused when Kerry insists he steer clear of Tracy. Later, Tracy makes a show of leaving the village in front of Sam, will he be swayed and ask her to stay?

Emma surprises Finn and Ross by arriving on their doorstep. Finn is relieved whilst Ross is curious she came back at his request. Emma seems wary around Ross especially when he questions her about what makes him so special to her? Will Emma shed any light or will Ross be left with questions unanswered?

Moira's stunned when Cain reveals they will be looking after Noah if Charity is sent to prison. Aaron is pleased when Robert offers to book them a hotel room for the night. Val and Pollard are disgusted to see the scrapyard is going to be close to their home. 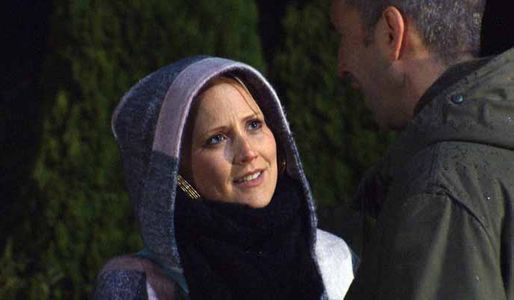