Aaron’s plans to avoid attending the funeral are dashed when he realises he can’t let Chas down. Soon he gives Robert cause to panic when he tells him they should tell the truth, today. During the funeral service, Aaron hurries out, unable to take it anymore. At the wake he snaps at Robert when he tries to get him to keep quiet. Meanwhile at Tug Ghyll, Andy is preparing to end it all and grabbing a bottle of whisky heads out. Soon Andy is is spotted screeching out of the pub car park by Aaron and Robert.. Soon Andy is at the local steep quarry parked dangerously near to the precipice. With Katie gone he is ready to end it all. Andy truly believes life is no longer worth living but can Robert and Aaron and track him down save him before he takes his own life?

Priya outsmarts Jai when she sacks Kirin publicly and Jai is impressed. However he’s unaware it was all pre planned by Kirin and Priya.

Laurel’s nervous about her job interview and quickly knocks back some vodka before she goes but could the drink have jeopardised her interview? And will she even make it? Later, Laurel lies to Marlon and tells him the interview went well but Marlon knows she’s already lied to him about the sacking at the factory.

Chas heads out with Vanessa and Leyla to say their goodbyes to Katie. They get to a secluded spot in the countryside ready to let of their fireworks in her memory. Harriet’s feeling sorry for herself as Bernice drags her next door to get drunk... 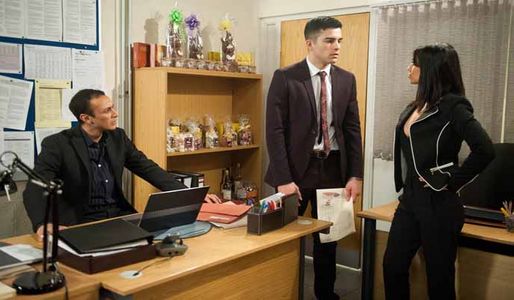