The solicitor calls Chrissie to put back their meeting and Lawrence is concerned at her desperation to prove Lachlan's innocence. Chrissie is taken in by his story and lets him make his own way to school. David sees him on his way and tells him he wants the truth from him about what happened. Pollard's horrified as he watches David manhandle Lachlan into his car boot and rushes to tell Alicia. Meanwhile, at the barn, a terrified David jumps out of the car, steeling himself as Lachlan shouts from the boot. A panicked Alicia tells Leyla what's happened and they need to find him before the police find out, whilst at Home Farm, Chrissie calls Lachlan, concerned as she leaves a voicemail telling him the solicitor is there. David tries to get Lachlan to tell the truth but he mocks David. David's clearly unsure what he's going to do with him as he's clearly out of his depth.

In the café Emma watches Carly intrigued. Later, Emma's clearly up to something as she spills a drink over Carly and offers to buy her another. Carly and Ross are amused when they realise Emma's set them up.

Doug checks the marker on a bottle, frowning to see it's lower. He's worried about the crate of bubbly for the pamper party but Laurel insists it's not for her. Kerry later brings the products round to Tall Trees and forces Laurel to practice on her. Kerry suggests a drink to help but Laurel refuses.

Pearl's guilty when Paddy insists he's taking her to the memory clinic. Aaron, meanwhile, finds it impossible to be around Andy.

In the barn David loses it when Lachlan tells him he's bringing a case against Alicia. Meanwhile, Lawrence and Chrissie fail to find Lachlan and Chrissie checks his browsing history and realises he's been lying to her. How far will Lachlan take it and will David’s actions make matters worse?

Debbie wonders if Ross knows Carly's related to Donna. Ross and Carly go back to Dale View and joke with each other, but Ross looks at a photo of Donna and wonders if he can ever move on.

Laurel struggles at the party and downs a drink. Filled with confidence, she continues her sales pitch. She and Kerry are chuffed with their profit. But soon Laurel is lying to her father to cover how much money she really took from the event.

Back from the appointment, Pearl insists it was all a big fuss over nothing. But is Pearl running out of options? Paddy is concerned for Aaron worrying it’s Robert who is troubling him. 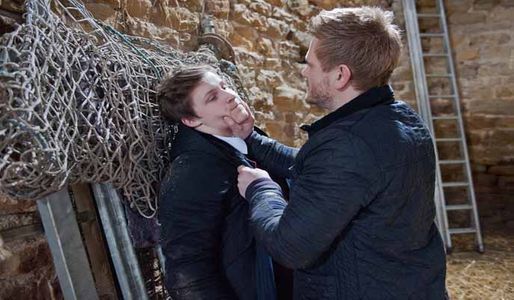