Emmerdale 19/05 - Rachel fumes when her plan is foiled

Sam's worried about Rachel's plan for them to disappear without telling anyone, wanting to say goodbyes to his family. Later, Sam goes against Rachel’s wishes and confesses to Lisa and Zak that he and Rachel are secretly leaving with the kids. It’s not long before Lisa is knocking on Jai’s door. Clever Jai soon scuppers their plan leaving Rachel furious. But who and how will she take her anger out on?

Ousted Laurel continues to leave messages for friends and family who continue to blank her. In the café, Ashley's worried for Laurel and alarmed when Bernice reveals she's been calling Gabby too. Marlon concedes agreeing to talk to her, but is determined it is all he’ll do. Marlon warns Laurel to stop hassling everyone, insisting she has to prove she's a good mum by staying away until she's sober. But will Laurel take heed of his advice, or find another way to get to the children?

Vanessa's awkward around Adam and Victoria. Adam covers to Victoria as to why he's not seen her much lately, the pair head back to Keepers Cottage determined to spend some time together but are caught off guard to find men loading Betty's things into a clearance van, what is going on?

Kerry's enthusiastic about the business course but Vanessa queries her motivation? 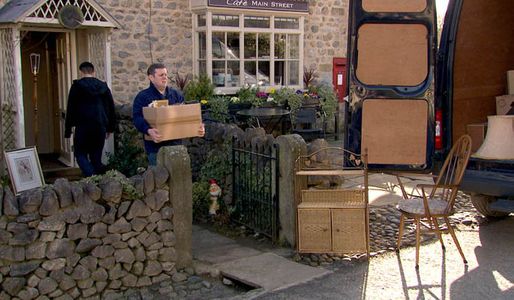