Cameron's excited as she has an idea to get married in Las Vegas in two weeks, but Cameron tells her they'll think about it later. Charity's worried to hear the news and tells Debbie, though she's relieved when she seems to take it well. But Debbie's face turns to stone when Charity leaves.

Cameron visits Debbie and reassures her he won't be marrying Chas - he wants her. Debbie hardens and tells him to leave as she realises he won't tell Chas the truth.

Elsewhere, Gennie watches Debbie throw Cameron out. Debbie covers why they were rowing but Gennie thinks it's because she's terrified of Cameron. Gennie tells Debbie he threatened her once too and that they should tell Chas, but Debbie snaps and warns her not to before asking her to leave.

Also, Rishi gives Gennie a car as a leaving gift and Bob and Brenda head to Scarborough for their honeymoon. Dan and Kerry are hungover on their night out, where they got matching tattoos! 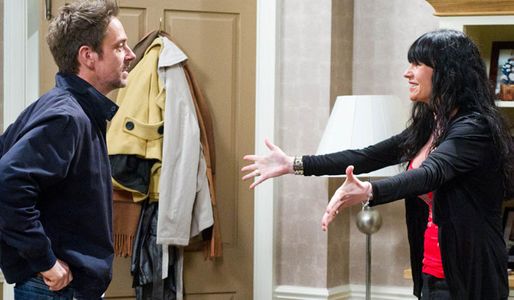