Debbie needs Cameron to confess soon as her confidence is slipping. She and Cain go to the police station with their plan to make him admit what he's done. Debbie's fitted with a wire and they've decided on a code word in case she needs help.

Debbie puts the plan into action and is relieved when Cameron opens up at last. But the police don't arrive as expected and she finds herself alone with a murderer.

Elsewhere, Alicia apologises to Megan for yesterday. She struggles to keep a brave face, especially when she and David end up reminiscing about their own wedding.

Also, Pollard and Val take the B&B off the market so they can stay and support Amy. She starts to feel guilty that they've changed their plans because they believe she has proper access to Kyle.

Cameron insists the recording on the dictaphone is fake and that he didn't kill Gennie. Debbie starts to lose it and Cain can't face the situation any more - he forcefully insists the police intervene and arrest Cameron. But instead the police arrest Cain for obstructing their enquiry.

Cameron eventually confesses and Debbie utters the code word, shouting for the police to get him and revealing the wire. But then Cameron bolts the door shut and wedges furniture against it. It quickly turns into a hostage situation and he warns the police he'll kill Debbie if they come any closer.

Elsewhere, Paddy feels insecure when he finds Vanessa in the house with Rhona and she tells him she's ready to go back to work - why will she listen to Vanessa and not him?

Also, Dom's annoyed when Alicia seemingly gets the sack, but she makes him promise not to say anything to Megan. 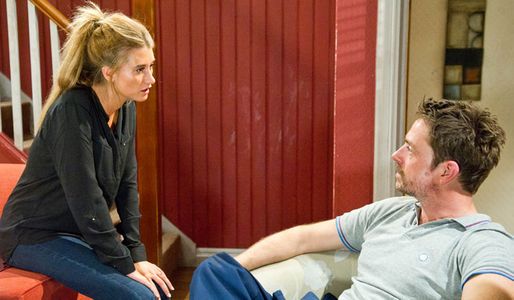