At the hospital, Marlon's shocked at the state of Ashley as Laurel explains the damage from the TIA might be permanent. Marlon comforts Laurel but confused Ashley sees and angrily accuses them of having an affair. The nurse has to intervene leaving Laurel devastated. Laurel struggles to convince Ashley that they're together and happy but can’t cope so leaves him with Diane, the fight gone out of her. Ashley takes his bandages off as Diane tries to explain but as she turns around, she sees Ashley has left the room. Ashley walks purposefully down the corridors and outside in his pyjamas and into the streets.

Leyla's annoyed when her attempt at an olive branch with Tracy is ignored. Later, David insists to Leyla he and Tracy are too strong to break but he feels terrible when she tells him Tracy was crying into the wedding album. Can David make it up withTracy?

Lisa volunteers herself for the job of Mrs Claus and suggests Zak for Father Christmas; a perfect solution to get him some money for the house. But will he be keen? Everyone is worried about Moira who is drinking heavily. Pete tells her of the meeting tomorrow and writes the details on a napkin so she won’t forget. But will it work to remind sozzled Moira? Bernice tries to reach out an olive branch to Nicola but will she accept it?​​ 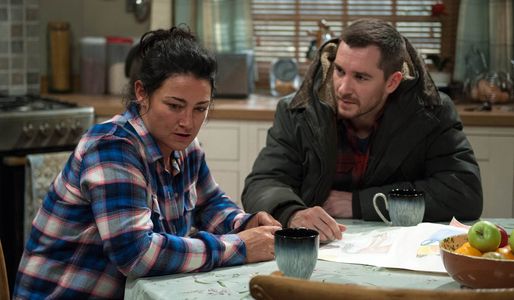