Pierce distributes flyers at the scene of the accident to get information. Andy fumes to see Debbie’s sent a card to Moira. He tells Cain he needs to know where his kids are. After trying Cain, Andy pleads with Moira to help him get Debbie's details and she finally relents. But neither of them see Holly's been listening to their conversation. When Aaron forgets Liv is meant to be at school, he realises the enormity of looking after his sister. Sandra soon turns up telling Liv they're moving to Dublin for good. Liv refuses and Aaron makes a suggestion but will Sandra go for it?

Belle hides her text activity with Dr Bailey from Lisa. Lisa suggests to Joanie she look in the bins for her ring. Later, Rishi's appalled to see Kerry and Joanie rifling through the bins and makes Joanie an offer. Vanessa is at loggerheads with her friend. 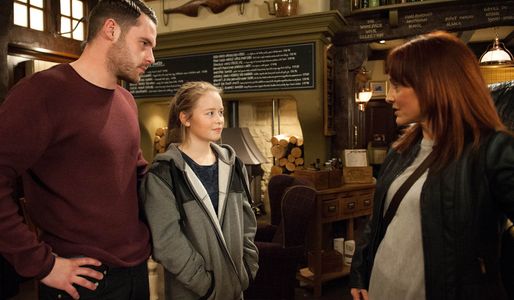