As a stunned Belle flees the scene of damage, Bailey is left there at his home desperately trying to convince wife Angie not to call the police. Belle is fuming when she confronts Lachlan for interfering but he can’t help blurting out he loves her. Once home Belle tells Lisa the stalker story was just a cover for an affair. Soon the police arrive and arrest her. Meanwhile, Angie suspects Bailey isn’t telling her something. At the police station, Belle continues to cover for Lachlan, sure her DoctorBailey will save her.

Diane, Kerry, Nicola and Laurel have lost their menfolk and realise they must be somewhere together. Meanwhile, the pirate ship is the location for a full scale toy gun battle. The men versus the children. But soon the adults are caught red handed by their annoyed partners who witness their game. Nicola openly tells Jimmy off, explaining he’s supposed to be ‘babysitting’ Ashley just as Ashley appears from the pirate ship. The penny drops for poor Ashley and Laurel realises she has got some major explaining to do ...

At the pub, Marlon begrudgingly serves Pierce and Rhona until he gets a dark idea from Carly when she brings over some laxatives for April. Marlon maliciously stirs some into some gravy ready to serve to Pierce. Surely Marlon will come to his senses before he serves up his doctored concoction?ALSO: Cain and Moira believe Holly is doing well. Meanwhile, Holly hides a wrap of cocaine from Cain but goes to take it when the coast is clear.​​ 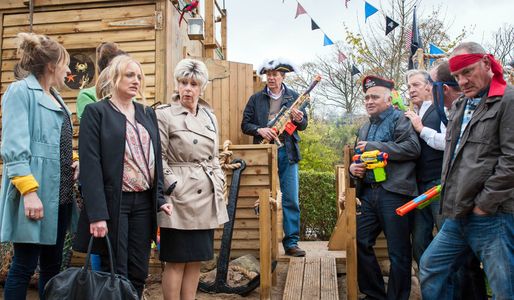