At the spa, Belle orders cocktail after cocktail, guilty for what she’s doing. Charity tries to stop her, insisting faking a miscarriage is her only option but sulky, Belle insists on handling this her own way. All of a sudden, drunken Belle is alarmed to see her Mum arrive at the Spa who has come to surprise them...

Tracy confides to Diane she only said yes to David’s proposal because she couldn’t say no to a man with cancer. MeanwhileDavid begs Jacob and Pollard for their blessing. Later, Tracy bursts into tears as she tells David she can’t marry him. She warns him he’s proposing for the wrong reasons. David accepts and announces to everyone they’re disengaged. However, he warns Tracy this isn’t over and she’s surprised to see his determination!

Liv’s exasperated to learn Aaron and Robert are fighting again. Robert tells her Ryan showed up and guilty, she’s determined to fix things. In the bar,she asks for Finn’s advice on rekindling their romance. Luring them to the back room, she leaves them with curry and beers to talk. Will Liv’s Cilla routine work?

Lawrence wakes up to the sound of revving outside. Hungover, he goes to investigate and finds Lachlan is driving donuts on the lawn in one of his classic cars. Annoyed, Lawrence tells Lachlan he doesn’t care and Lachlan accuses Lawrence of throwing a tantrum just because he’s gay. Lawrence slaps him, shocking them both. Hurt, Lachlan drives off and Lawrence watches him with a flicker of concern.

Holly’s not keen on taking the doctor’s advice to use methadone.​​​​ 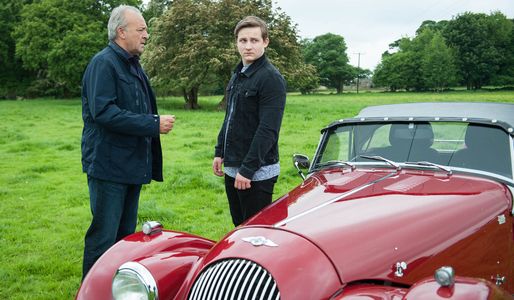