Laurel is nervous about attending Leo’s party, Ashley feels guilty as he knows Marlon wants a divorce. Laurel’s soon dealt a blow from the clinic, but she wants to be honest about it with Marlon. Laurel arrives at the party and asks to speak to Marlon in private, confessing the news. A horrified Marlon is forced to admit he’s made enquiries about them officially separating. A distraught Laurel rushes out followed by a worried Ashley.

Meanwhile, Adam is determined to make things up with Victoria but matters get worse when he learns Vanessa’s baby is his after all. Meanwhile, Victoria is now uneasy, knowing what Robert has done and further panicked when Robert tells her he's already called the police. Later, Victoria is floored when Kirin announces the baby’s Adam’s. In the street, fired up Adam has deceived her; she heads out to her car as she leaves an angry voicemail for Adam. As Victoria speeds off in the car she almost knocks down Adam. Horrified at what she could have done they argue. A distracted and angry Victoria goes to speed off again, but this time she hits Ashley knocking him hard to the ground with her car.

Ashley picks himself from road, dazed and confused but assures Victoria and Adam he’s fine and heads to find Laurel, whom he was following. Ashley soon realises his head’s bleeding. Meanwhile, Laurel’s in the pub battling the temptation to drink and even tries to steal Sandy’s drink. Ashley arrives and confronts her, telling her to put the drink down as she’s doing so well, suddenly on leaving the pub, Ashley collapses. No one knows what is wrong as Paramedics speed him off. In the hospital Harriet and Sandy are given the news. Ashley has had a head trauma and is now in a medically induced coma. Adam and Victoria panic over Ashley’s collapse. Meanwhile, Leo’s party is over and Marlon feels bad when Harriet and Rhona advise him, it was hard for Laurel to make the admission she did, that she has an STD. Adam is shocked to hear Ashley’s been rushed to hospital and rushes to warn Victoria. She freaks out thinking she’s killed him.

Kirin has stayed out all night and is still reeling from news the baby is Adam’s. Rakesh is determined to get him through it, suggesting he throw himself into his studies. Despite everything it’s clear Victoria still has feelings for Adam but Moira’s shocked when Adam tells her the baby’s his. Later, Vanessa is floored when a drunk Kirin makes her an offer. David struggles with the idea of leaving Amba meanwhile Alicia refuses to invite Leyla to their leaving lunch and later a further upset splits apart the sisters further. Pollard’s teary as he hugs David goodbye while Alicia’s on edge, bracing herself to expose Leyla’s affair but will she? Meanwhile, Leyla begins to doubt Jai’s motives as he pressures her to make sure Alicia keeps her mouth shut. Carly has an idea on how to get Brenda’s signature but will it work? Emma gets bad news over James; he’s planning to move out of the village. 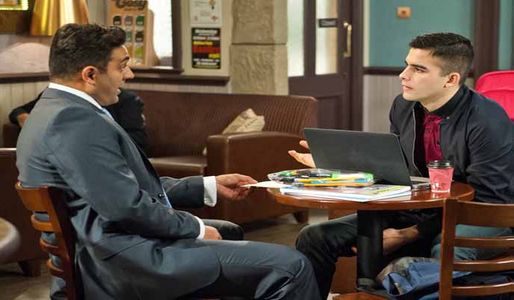