The atmosphere is tense between Chas and Aaron. Diane sees Chas is caught in the middle between her son and Gordon. Cain finally admits to Chas about catching Aaron self-harming, which leaves her initially blaming Robert. Later, Chas confronts Robert but he tells her he can't betray Aaron's trust but she needs to speak to him fast as he's falling apart.

Cain tells Emma Charity won’t let her anywhere near Moses when she gets out of prison and he and Moira are surprised when she doesn’t put up a fight. But Emma has a plan and is soon face to face with Charity in the prison visiting room. Emma explains her proposition. Emma lays out her terms she wants Ross to have custody and his name on Moses’ birth certificate - but will Charity agree?

Carly warns Tracy her wine tasting is a one-off. Tracy's worried about the wine shortage but thinks she and Carly can solve the problem as she calls Duncan but can he help? Pollard is determined to do Val proud and win a B&B award. Whilst Nicola hands in her resignation to be a full-time mum. But is she really happy about the situation or is she putting on a brave face? 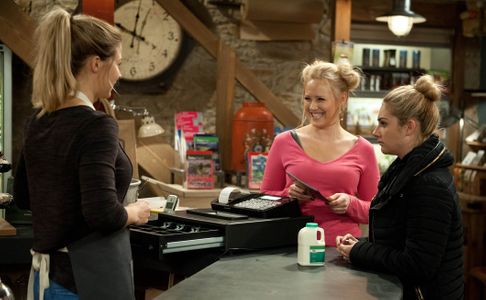 Emmerdale 25/2 - Aaron tracks down his stepmother

Emmerdale 22/2 - ​Chas and Robert unite to plan their revenge