Charity tries to remain upbeat for Noah before her court hearing. Meanwhile, Cain is oblivious how much comfort Charity is taking from his support and their closeness. Later, Charity prepares to confess her true feelings to Cain, but a suspicious Chas interrupts them, but will Charity get to explain her feelings to him?

Sam is worried about his day in court, plagued by uncertainty. At court, Charity’s confession is deemed inadmissible, but as Sam watches on, he’s still struggling over which way to go. Sam takes to the witness stand and is torn as he looks over to Charity, who fears he might be about to give her one final dose. The Prosecution question Sam, forcing Charity to cover her unease as he struggles to lie about Declan. As Sam continues to struggle with lying, the Prosecution seems satisfied that Charity is being painted in a damning light. Next it’s Rakesh’s turn to cross-examine Sam, and even though it pains him, Sam finally comes through and lies for Charity, insisting Declan set Charity up. Charity is left feeling hopeful things could go her way. Afterwards Sam feels terrible, as Ali is annoyed insisting Rachel deserved the truth. Charity is next to take to the stand and delivers her emotional testimony to the Jury. Charity pitches her testimony perfectly, and Rakesh is satisfied that they’ve done enough. But have they…?

Ross and Finn both struggle with their Mum's rejection, but Ross suspects there’s something Emma is keeping from him. Soon Ross is given the resolve to help win Emma back. He convinces Finn they need to try again with Emma. But Ross isn’t proposing a normal approach instead suggesting they scare her by staging a burglary on her property. Finn is incredulous; worried Ross’s plan will end in disaster. But will it?

April and Amelia are wary as they consider Pearl being a werewolf. Mischievous Gabby takes delight in scaring April further reminding her tonight is a full moon. Later, Paddy is guilty to realise he is to blame for April believing Pearl is a werewolf. Aaron and Robert enjoy a newfound intimacy but will Aaron struggle over jealousy when Robert returns to Chrissie? 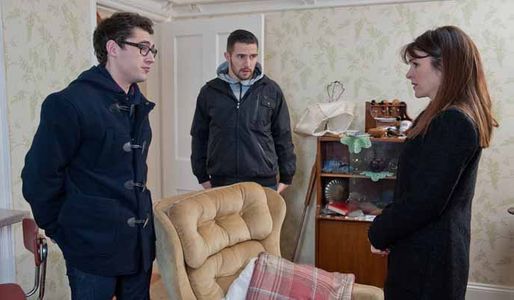