Emmerdale 20/03 – Someone from Marlon’s past returns

Everyone’s enjoying Marlon’s 40th birthday party. Paddy arranges for him and Marlon to go quad biking, but when April is almost run over Marlon helps her out, oblivious as to who she is. When Donna arrives and the young girl runs to her, Marlon is shocked. Donna plays down the situation, insisting he should celebrate his birthday and assuring him she doesn’t want him back. But what is she keeping from him?

Everyone is keeping an eye on Priya, and although David turns up wanting to help, he is turned away.

Charity finds out that Jai’s solicitor has obtained a copy of her contract and is determined to find out who gave it to them, blaming poor innocent Finn. Megan finds the whole thing pretty funny and admits to Declan that she gave Jai the contract. Will Declan tell Charity?

Belle reveals that she overheard Lisa and Cain’s plan to get rid of Dom. Lisa sees Belle and Dom together at the pub and is thrown when she sees how close they are, and that Belle could tell him the truth at any moment.
​
Elsewhere, Debbie is on-and-off with Pete, whilst Ross is determined in his quest to get her attention. 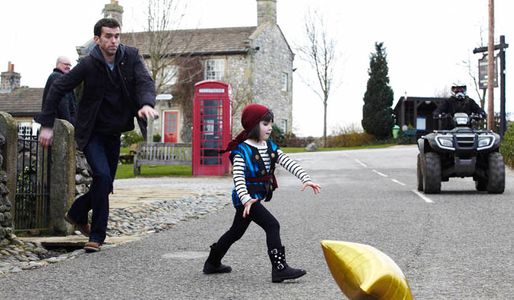