Lachlan worries it’s down to him Donny got beaten up. Robert doesn’t buy Donny’s story. Donny is determined to get himself out of his financial hole and uses Chrissie in his plan but a flat tyre thwarts his plan. With Charlie still on his back for cash Donny tries a new tack. Using Lachlan’s fear bullies are on his case, Donny forms a new plan suggesting to a thrilled Lachlan he can come and live with him in Scotland. But how will Chrissie react to Donny’s idea?

Belle’s happy to be working at the factory, but totally unaware it is only work experience, as she’s not being paid. Lisa tells Jai she will pay Belle out of her own wages and discreetly pops £20 in an envelope for her. But later Lisa is left very worried how long she can keep it up.

James is grateful, but wary of the consequences when Pete says he can stay with them. Later, Debbie is caught in the middle when Pete forces her to let James’ stay. Debbie finally convinces Chas to go on a night out but how will Chas react to learn where James is staying.

Finn plans a night in with his brother but Darren interrupts, but is Finn over him? Emma explains to James she called the police to protect Ross, but James is puzzled after a comment from Val. Debbie warns Ross to stay away from Aaron. 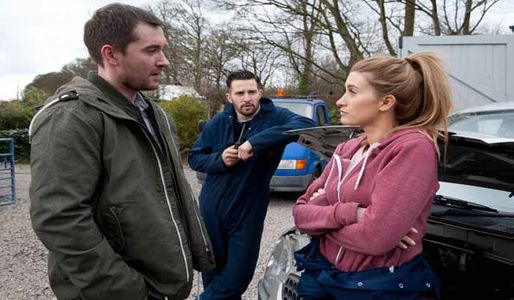