Emotions are high at Laurel’s mother’s wake and stung by her sister’s blunt remarks, Laurel ends up blurting out more than she means to. Arriving home, Marlon and Laurel are both in a sombre mood, in need of some comfort she moves in to kiss him but can they accept their relationship is over or is there one last moment of intimacy to be had for this doomed couple?

Debbie’s gutted when Ross tells her they can’t leave today. He asks Moira for a job at the farm, to the objection of Pete but she gives it to him thinking it’s so he can distance himself from Debbie. Ross darkens, a plan obviously in place. But just what has Charity got Ross to do?

Paddy’s edgy when Rhona answers a call from Home Farm. Wanting to keep her away, he takes the call out himself. He clocks Aaron smartly dressed with Robert and fears they’re becoming embroiled again. Paddy tries to stir things by telling Lawrence about Aaron’s criminal record, leaving Lawrence alarmed. Later, Chrissie invites Rhona and Paddy for lunch as a thank you for the call out but Robert firmly tells Paddy to make an excuse and cancel…

Diane comforts Doug over the loss of his ex. 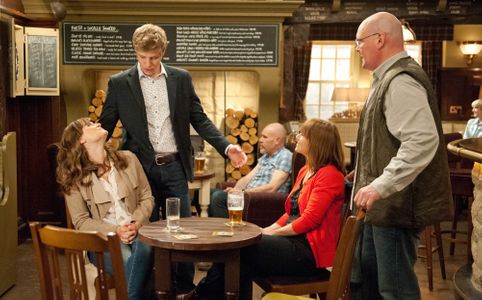