Robert’s stricken to overhear his sister Victoria agree to take Chrissie’s place as the first one up the climbing wall at the opening event.Knowing he has put her life at risk due to having tampered with the bolt on the safety wire, a worriedRobert sneaks back in to fix it. As he scales the wall to replace the bolt a calamity occurs when he trips and the safety rope coils around his foot leaving him suspended and upside down half way up the wall. In pain, he finds Victoria’s number on his phone to attempt to get help whilst delaying the opening crowd. When Victoria arrives Robert puts her in the picture over Chrissie having set up Andy.And Victoria is soon seething with revengeful rage…

Tracy confides to Vanessa she’s worried David’s changed his mind about getting married. Tracy confronts David in the shop and he eventually confesses his concerns. He’s worried about his test results the next day. Tracy is floored when David announces if the cancer’s back he won’t be able to marry her.

Jimmy’s lies spiral out of control when he agrees to a picnic date with Lydia, the woman from the bereavement group.​​​ 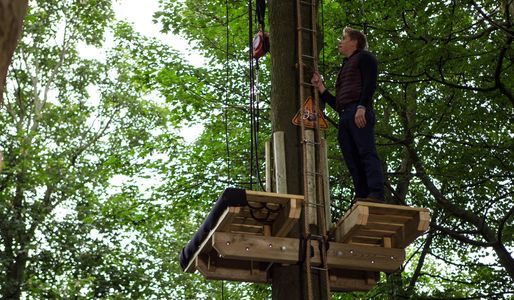