Doug and Marlon worry of Laurel’s whereabouts having not returned home all night. Meanwhile, Laurel wakes up in unfamiliar surroundings and whilst initially dazed and confused, she is soon hit hard by reality; she’s slept with a total stranger. Laurel makes an escape but it’s not an easy negotiation. Later, Harriet tells Marlon she has called her police contacts and Laurel is now considered a missing person. When a shamed Laurel eventually arrives back in the village, she is quick to spin a web of lies. Just as it seems Marlon is ready to give things another go, an unwelcome guest arrives and it’s not long before the ugly truth begins to unfold. Could this be the end of Laurel and Marlon?
Later Ashley spends time with Laurel and she finally makes a big admission.

Brenda's incredulous when Bob suggests they help Carly buy David’s shop by getting a loan themselves. Meanwhile, Pollard and Alicia are baffled when David refuses to accept any offer from Chrissie for the shop. Alicia realises it's because of Lachlan and is gutted David has reacted like this. The estate agent tells Alicia and David they shouldn't pass up an opportunity to sell the shop but David is determined not to give the Whites’ what they want. However, when Alicia goes to see Chrissie later, a plan is forged which could see Alicia, Chrissie and Carly all get exactly what they want. Or could it backfire in Alicia’s face?

Debbie covers her concern at Ross' battered face and is shocked when he tells her he won Charlie some cash in a bare-knuckle fight and it’s a way of repaying the debt. In a bid to put Ross off, Debbie takes him to see Zak, hoping his stories from his days as a fighter will help. But will her plan backfire?

With Betty’s nose still out of joint over her lack of reception, Victoria knows she has her work cut out to get back on Betty’s good side. Sandy suggests they have a party for her to bring her round. Betty arrives and is speechless. It is a full on fancy dress party to celebrate Betty’s return with everyone dressed up. But soon, it’s Betty’s friends that are speechless by her shock announcement...

Cain's not happy Debbie seems to care so much about Ross and pulls Pete aside to give him a serious warning talk, about ever becoming complacent with Debbie. Adam's awkward to see Victoria and Vanessa together. Victoria's thrown by Adam's reaction when she asks him to move in now Betty has gone. 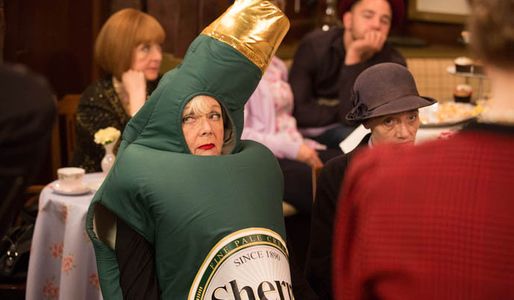 Emmerdale 20/05 - Laurel stoops low to get a drink