Laurel’s stunned and heartbroken as Ashley goes on to further explain his dementia diagnosis. It is heart wrenching as he explains the prognosis and explains how very much he loves her but can’t be with her. Laurel is distraught and full of sadness as she heads off reeling with the enormity of the news. Soon Laurel privately confesses to her father what Ashley has told her. It’s clear she’s determined to try and help Ashley in whatever way she can. Doug warns Laurel to be careful with what she takes on. Meanwhile, a frightened Ashley is in the church overcome by the enormity of what he is to face, he prays for Laurel to understand why he needs to see his illness through alone. But by saying his prayers out loud, Ashley comes to an important realisation. Can he really do this without Laurel? He leaves the church with purpose.

Aaron is worried Robert wants to buy Diane’s share and enquires about taking money out of the scrap yard so he can put a deposit down on the pub, but Adam isn't keen. Cain overhears and Aaron's frustrated when Cain says he doesn't have the sort of money they would need to buy Diane's share of the pub. Meanwhile, Diane meets up with Gordon but when they start to discuss Aaron’s troubled past, Gordon suggests offering a lifeline but will Aaron accept?

Gabby shows Lachlan David’s web page which offers a £500 reward in return for Val’s ring. Lachlan thinks it's easy money and begins to plot how he'll return it. Meanwhile, David's excited to see someone's messaged him with a picture of Val's ring but Leyla's concerned…

Kerry seeks compensation from Rishi as she blames her diabetes on working in the sweet factory. Leyla wants Megan to apologise for allowing her to think she was responsible for the miscarriage. 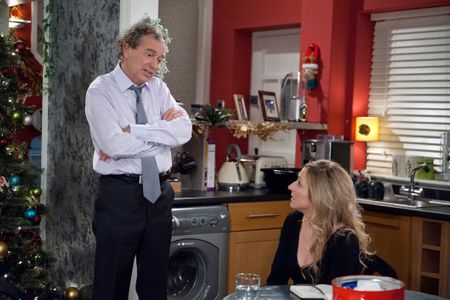 Emmerdale 12/07 - Vanessa's shocked by Rhona's accusation as they argue