Bailey wakes in hospital to find Belle by his side. She insists love will see them through,but he’s quietly doubtful. Doctor Bailey is soon discharged from hospital and knowing he needs to tackle things head on, goes straight to face his boss Dr Cavanagh, but Angie has beaten him to it. Bailey is sacked on the spot and Dr Cavanagh explains he is reporting him to the GMC. Doctor Bailey packs his things as he tells Belle they’re finished. A deeply upset Belle blames Lachlan and Cain for driving Dr Bailey away.However, Cain is pleased it is over. Belle is angry and full of revenge as she picks up the phone. Will Belle really put Cain in trouble with the police?

Holly sneaks to meet Simon, but doesn’t have enough money for drugs. When Simon learns she’s working with Victoria he offers her pills to sell from the van. Later, Holly waits till Moira leaves to get out her wrap of drugs, clearly intending to make the most of being alone. Before longVictoria finds her and Holly hides she is high. Victoria sees her doodlings, and suggests she design some graphics for the van. Holly feels guilty and calls Simon to say the deal isoff, promising to return the pills.

Emma’s alarmed to learn Pete’s moving out, clearly still angry over her fake illness. Meanwhile, Vanessa isn’t impressed by the plan to split Tracy’s room in half for Pete to share. Tracy’s aware Vanessa is losing patience with her over not paying her rent. Emma is hurt to realise she is the sole reasonPete wants to move out.

Moira finds Cain’s bloody shirt but he reassures her Bailey won’t tell on him.Laurel is glad to have Nicola by her side as they bond together in the pirate ship.​​​ 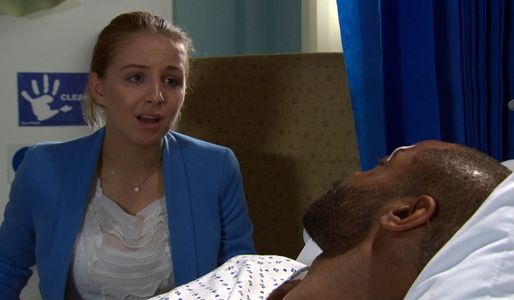