After having received the photo text message revealing his kiss with Chrissie there’s palpable tension at the dinner table. Once alone in the kitchen, Cain throws Robert against the wall, demanding he talks, Robert explains he wants Cain to find Adam and Victoria in return for his silence over the photo, leaving Cain caught. Chrissie walks in and panics when Robert shows her the photos playing the role of hurt husband. Will Robert forgive Chrissie and if he does, is it all an act? Will Cain shop Adam and Victoria to Robert, betraying Moira in order to keep his secret?

Lisa does her best to comfort Joanie when she shows them what’s left of her home. Lisa tells Joanie she’s coming home with them, suggesting Joanie can help tutor Belle. Kerry’s happy to hear Kyle’s back in the village and is keen to impress Joanie. She goes home and shows Dan a video she made for her assignment. He’s impressed and Kerry’s giddily triumphant.

Kirin confides in Priya he missed his interview and is nervous to tell his dad but decides to tell him after dinner. However, his plans to come clean are put on hold and soon Kirin feels uneasy lying to his father.

Everyone’s surprised to see David in the village and Bob and Carly worry over why he’s really back. Bob realises he needs to keep Brenda away from David. 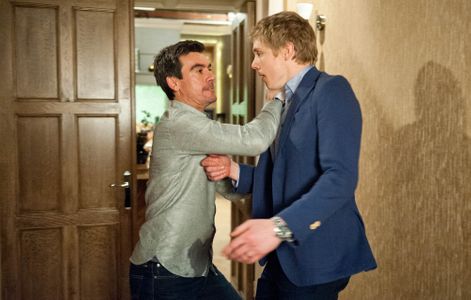