Paddy’s frustrated, unable to get hold of Aaron. Meanwhile, Robert is naively looking forward to spending the night away with Aaron, totally unaware of what Aaron now knows. Chrissie suggests joining Robert on his business break but he quickly reassures her they’ll spend time together when he’s home. Meanwhile at the holiday lodge, Aaron’s on edge as he waits for Robert. When he arrives, they both head inside with Aaron acting as normal as he can, covering his hatred. When Robert’s back is turned, Aaron takes out his mobile phone and hits record. But will his trap work? Robert is unsettled by all Aaron’s questions and tries to kiss him but Aaron can’t. Pushing Robert away. Aaron blurts what he knows and Robert is stunned as Aaron accuses him of trying to kill Paddy. Robert tries to explain, but soon the conversation turns to Katie’s death and Aaron is utterly dumbfounded by what Robert admits to and launches himself at him. Desperate to defend himself Robert hits Aaron hard with a beer bottle, knocking him out. Robert panics not knowing what to do Aaron is lying unconscious with a bleeding head.

He checks Aaron’s phone and discovers its being recording their conversation. How will Robert react to know Aaron has totally set him up?

Megan and Rachel are both baffled when out of the blue Jai, gives Rachel time off work to move back into Tenants cottage. A delighted Rachel starts unpacking when suddenly someone hammers on the door. Both Sam and Jai are shocked to see a police officer with a warrant to search the property for drugs. Elsewhere, Megan quizzes Jai and is secretly horrified to hear what his plan is. Will Jai’s plan succeed?

Marlon and Laurel brace themselves to tell the kids. There is a clear spark between Bernice and Lawrence but how will she react when he asks her on a date? 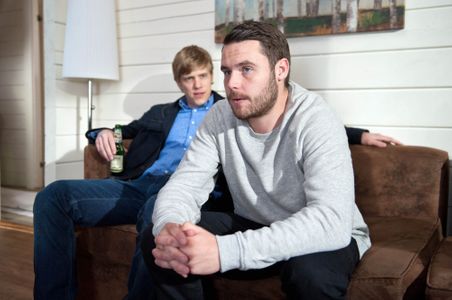