Pete still tries to support Moira but Leyla is adamant she needs to look after herself. Later, in the Woolpack, Moira's drinking again and Leyla's defensive of Pete when she has a go at him. Leyla soon learns about the kiss between Moira and Pete. Moira recklessly heads out to get in the van and Cain goes after her but fails to stop her from setting off. Seeing the danger before him Pete rushes to push Jacob out of the way of the vehicle but ends up being knocked down himself.

Laurel insists to Doug she will talk to the kids about Ashley. Laurel's frustrated when Gabby thinks she's giving up on Ashley and Sandy's upset at seeing Ashley in a state – can Laurel get the family on side?

Everyone waits to see Santa at the factory but Lisa's unimpressed when Zak admits he hasn't told Joanie about his new job as little Kyle waits in line. Will Zak be caught out? Tracy hopes tonight could be the night for Finn and Kasim.​​

Cain checks Jacob's okay after the accident whilst Moira tends to Pete. Cain takes the blame when Emma and Leyla appear asking questions. Emma is tending to an unconscious Pete when the ambulance arrives, she snaps at Leyla that Jacob's fine, as she is more worried about her son, whilst Moira's guilty at Cain taking the blame.Later, Leyla and Tracy are shocked when Jacob suddenly collapses. They carry him to the car. At the hospital, everyone waits for news on Pete as Leyla and Tracy rush in with Jacob who is rushed off by serious looking hospital staff. And soon the police are on the scene asking questions about the accident. Will Cain continue to cover for Moira to the police?

Laurel's surprised to see a Christmas tree has been put up, baffled how it got there. Could Christmas be looking up for them after all?

Will Finn get over his worries about taking his relationship further with Kasim? Zak suggests he get Lisa a free Christmas tree from Home Farm and Lisa offers to go with him.​​ 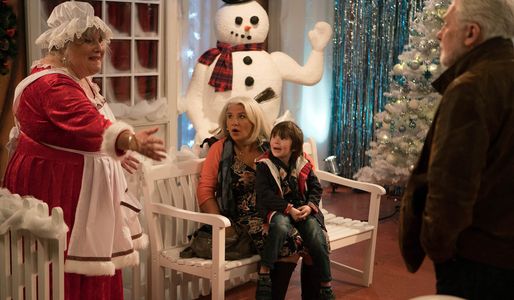 Emmerdale 17/12 – Moira tries to get James to face facts