Jimmy's incredulous Charity plans to hold their haulage firm Christmas party at Butler’s farm. Moira eventually agrees, though stipulates some strict ground rules. But Moira quickly regrets her decision when she returns home to an unruly bash. She wants Charity out.

Nicola's unwittingly forced to reveal she’s pregnant to her employers Chrissie and Lawrence. Later, Nicola suggests to Chrissie that Bernice could move into Dale View, thinking it will solve both their problems given Andy is moving to his new farm. Later, Nicola fumes at Jimmy for not having spoken to Bernice about moving out. How will an emotional Bernice react when she does hear?

Rakesh and Priya fake a frosty atmosphere to put Kirin off the idea of settling down. But when Rakesh asks Kirin to look after Amba for a few hours, Kirin senses something's going on.

Harriet is buoyed with a new vigour over finding Emma Barton. 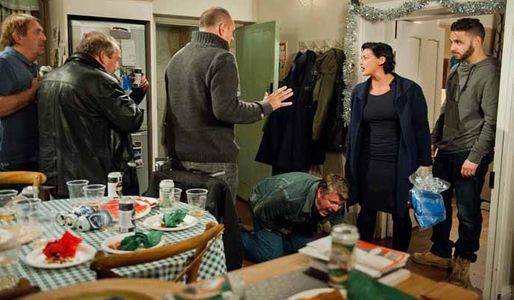