Paddy and Rhona are both pleased to be making some progress as they agree to meet for lunch. Paddy’s positive as he suggests they go away to Paris for the weekend, but the moment’s ruined when Pierce turns up, asking if Tess was having an affair. He tells them he’s found Tess’ second phone and Paddy’s horrified when Rhona agrees to talk with him tomorrow…

Charity demands to see the business accounts for haulage firm Home James, and Jimmy’s hopeful when a pleased Nicola tells him she’s made a fake set for her. But will Charity work out their game?

Lisa reassures Belle they’ll find somewhere else to live that they can call home. Later, Belle tells Chas about Lisa wanting to sell up. Whilst elsewhere, Joanie tries to convince Zak selling the house is a good move. Charity gets Ross on side to help her with something.. 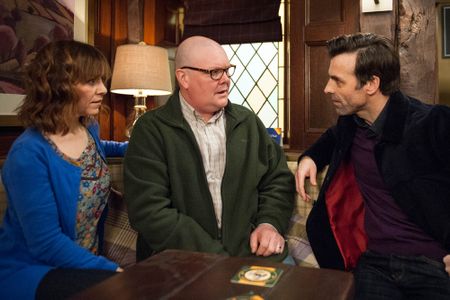