Emmerdale 22/7 - The stakes are high for a desperate Rakesh

Rakesh knows he needs money quick and bets five hundred. Everyone’s surprised when Pierce equals it. Rakesh wins again and Pierce dares him to up the stakes. They start betting at two grand. Rakesh gets a good hand and struggles to hide it. Finally, Rakesh and Pierce go all in...

Lawrence turns up with Sam at the salon and announces to Kerry that he’s clearing them out. She defends the place with curling tongs and Sam’s uneasy. Andy and Chrissie come over in time to see Lawrence attempts to barge through until he finds Bernice in his way. He says he’s evicting her andAndy gets riled when he insults Bernice. Chrissie takes him out and Bernice is devastated to see how Lawrence has changed.

Aaron continues to question Robert about the shooting and is shocked to learn Andy made a deal with Ross. He gets angry at Robert for not telling him,but Robert points out that since he found out there was never a good time. He begs Aaron to leave it and he seems to accept. Outside the salon, however, he punches Andy and tells Chrissie what he did.​​ 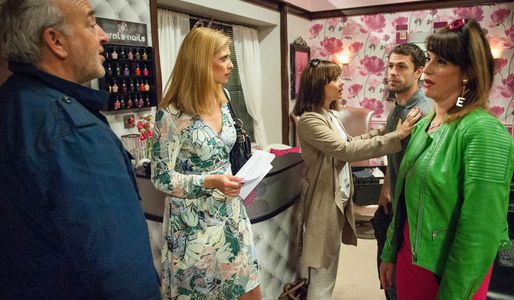