Sam is desperate to find Rachel, and wants Cain to get him fake passports so he can try and follow her. Meanwhile, Jai wants to find her just as much, and hires a private detective. He is shocked to find that he isn’t on Archie’s birth certificate, and Ali has to deal with Jai’s anger when he raids her locker for evidence, as he sacks and evicts her. Harsh!

Val and Pollard aren’t on the best of terms, and Pollard’s upset that she won’t tell him what he’s done. Diane suggests she and Val should chat, and Val runs into Ian which Brenda notices. Ian tells her he won’t leave until she tells him what he wants to do – is the cat about to come out of the bag?

James and Peter are excited at a vacant farm, but soon find it is well out of their price range. They realise they’ll be with Moira for even longer unless they can find cash quickly. Later, Pete takes out a bag of pills…what does he have in mind?

Elsewhere, Harriet thinks she has date with Dom, but Ashley thinks otherwise. David tries to talk to Alicia about getting Leyla to go away, but it’s Leyla’s first day at the factory. Brenda stole Val’s perfume, and she finds the thievery exhilarating.

The Spencer’s arrived home to find their house trashed. Ali overhears Megam say the insurance company have been informed that Rachel was to blame for the fire whilst Jai pushes his PI to find Rachel, telling him to do whatever it takes to get his son back. Ali confronts Jai, who is still determined to get rid of her, whilst Rishi tries to talk sense into him. Meanwhile, Ali confides in Dan about Rachel, but will she regret it?

Leyla loves spending time with Jacob, so how will she react when she finds out she’s going to be kicked out?
Harriet goes to see Dom and Gemma with a bottle of wine, and is embarrassed when she realises she got the wrong end of the stick, and Gemma just wanted help with her homework.
​
Pollard overslept but Val explains she has cancelled all the bookings. She admits to him about her holiday romance with Ian, but will she tell him the whole story? 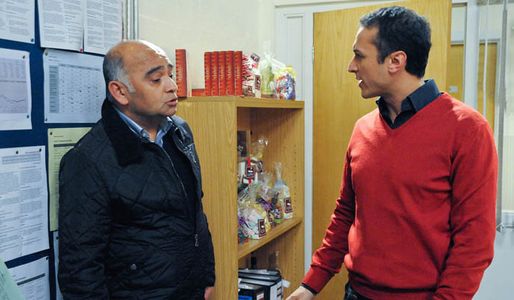 Emmerdale 01/07 - Jai will play dirty to get Archie