It’s Chas’ birthday but she’s not in a good mood. She’s lost her best friend and now suspects Aaron and Robert are back on. Aaron overhears her telling Paddy her concerns about Robert. A frustrated Diane confides in Doug about how she wishes she could help. Later, Robert comes to see Aaron but Aaron tells him things are over between them.

Jimmy’s puzzled by Nicola’s defensive mood after their failed night at the B&B. But Nicola puts on bravado to Val and Bernice, lying about having had a great night. With Priya busy at the salon, Nicola offers to take Amba for a walk. Bernice and Jimmy are soon both concerned when they realise Nicola’s been lying about their night. Meanwhile, with rain chucking down Nicola takes shelter in a barn with Amba. She soon realises they’ve been locked in. Nicola gets out her phone to ring for help but she hasn’t got any signal. Meanwhile, at the Salon, Priya’s worried Nicola’s not back with Amba yet and begins to panic further when she overhears Jimmy and Bernice discussing Nicola’s early menopause. Soon she’s ringing the police.

Rachel’s Looking over job advertisements, but tells David about the job going in Luton. When Jai calls over Rachel worries about how much he knows about the job in Luton. As he leaves Rachel gets a call offering her the job.

Chrissie’s unsettled, thinking David’s hiding something as they discuss Lachlan. Chrissie eventually confides in Robert about her worries over Lachlan, wondering if he’s gay.

Megan’s perturbed Jai’s up to something. Harriet’s upbeat after doing a talk at Gabby’s school it gives her a business idea. 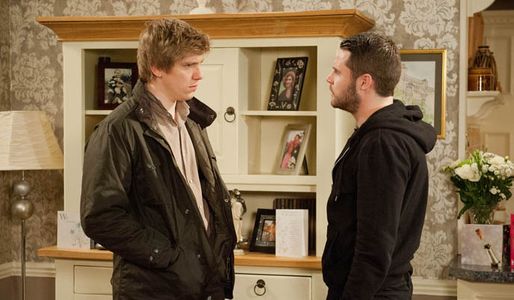