Lachlan’s excited about moving away with his dad. While Chrissie tells Donny she’s left the ten grand up in his room, Robert is curious wondering what Chrissie is planning. Soon, Chrissie and Ross go over the plan and Ross informs her he will have an accomplice and is soon tricking Debbie into helping him. It is not long before Ross and Debbie arrive at the hotel where Ross confesses to Debbie what’s really happen­ing and she refuses to help, angry he has brought her there. Ross heads to do the job alone. He is about to intercept the money exchange, when Donny tries to hand it over to Charlie. Outside the hotel, Debbie is walking away but seeing Charlie and his armed accomplice, arrive at the hotel, she realises the scale of danger and turns back to help. Meanwhile, Chrissie tells Robert about her plan, emphatic it needs to work. At the hotel things have got tense with Ross now having grabbed the money but both he and Debbie being pursued by the angry men. It’s a dangerous situation as Ross drags Debbie into a room to escape them. Slamming the door they hope they have lost them. But now they are trapped.

Val and Finn create a plan regarding Darren but Finn is soon left guilty when the scheme backfires. Will Finn get his comeuppance for messing Darren around?

Alicia gives Jacob a punishment for what he has done but feels guilty her problems have affected Jacob. Debbie and Pete have made up and Debbie’s glad to have things back on track but will Ross change things?

The pressure mounts with the angry men rattling the hotel bedroom doors and Debbie worries how she and Ross will get out of this. Meanwhile, Chrissie makes a call to Donny warning him he shouldn’t have used Lachlan against her and strikes a deal with him, telling him she will tell him the room number, if he leaves Lachlan’s life forever. Meanwhile, in the hotel room, Debbie is starting to enjoy Ross’ company and he confides about Donna telling Debbie you just have to go after what you want never mind the consequences. Later after some tense chase scenes as they flee the scene, Ross lays it all on the line for Debbie but will he get what he wants?

David squirms as he broaches the subject of sex with Alicia but it doesn’t go down well. Later, Alicia confides her fears in Leyla but will it help?

Kerry tries to console a heartbroken Dan after a phone call with Sean. Sean is in bits and needs Dans support. Reassuring Dan he’s not on his own, Kerry is keen to earn more money so Dan can visit Sean more. 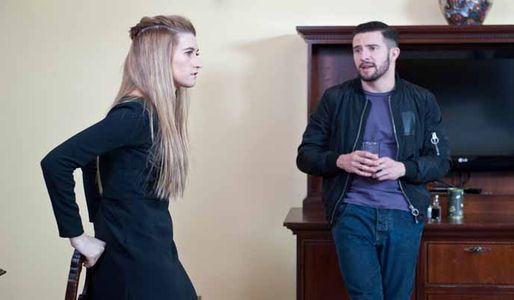