A worried Moira tells James that Adam and Victoria may have done a runner whilst Cain knows he needs to act fast. Robert continues to blackmail Cain with the photographs of him kissing Chrissie leaving Cain ready to explode. As worry grows Moira asks Finn if he’s heard from Victoria. Finn suggests not but Cain’s instincts tell him Finn knows more than he’s letting on. Cain simmers when he finds Robert arguing with Moira. Will Cain out manoeuvre Robert?

Rakesh plans a celebration; glad to think Kirin is back on the right track. Later, Priya asks for Kirin’s help in finding a missing computer file she has deleted accidentally. Kirin directs her to the correct folder much to her relief, but Priya makes a shocking discovery, the faked DNA results. A horrified Priya is quick to confront Rakesh, unable to believe what he has done, making it clear exactly where she stands on the matter.

Carly’s stressing over the shop but is distracted when she clocks a peeved Debbie. Carly asks Ross if Debbie is okay with Ross helping her out. Ross covers and pulls Carly close. However, Carly feels for Debbie so takes a bottle of tequila over to the garage. Meanwhile, Bob panics when Brenda arrives home early, as he’s determinedly keeping her and David apart. Later, Bob’s exasperated when everyone arrives for the shop launch but Carly’s nowhere to be seen. Will Carly make it to her own grand opening? Can an emotional David hold it together? Will Bob manage to keep Brenda and David apart?

Belle is struggling with a maths test and tells Joanie she has now resigned herself to the fact she’ll always be the one who killed her best friend. Whilst Joanie’s shocked by Belle’s revelation, it’s Joanie’s words of encouragement that seem to get through to Belle. 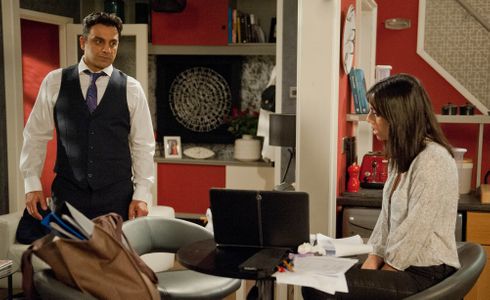 Emmerdale 23/8 - Can Cain Hold Back Any Longer?