Andy accuses Robert of killing Katie. Andy tries to ring the police but is left shocked when Robert knocks the phone from his hand. Robert pleads with Andy to trust him but leaves him thwarted when he finally admits to killing Katie. Andy is reeling and he tells Robert to leave but he refuses, a fight ensues....

Aaron admits to Chas that Robert killed Katie and he helped him cover it up. Chas is devastated as Aaron tries to explain what happened. Paddy tells Chas about Robert shooting him and she wants to hand Robert into the police.

Rakesh catches Lachlan with a gun in hand. Chrissie is upset when Rakesh explains he will not be able to represent her at the trial. Ashley is planning a quiet dinner for Harriet’s birthday until Bob suggests throwing her a themed party.

Victoria is shocked when the police arrive and arrest Robert on suspicion of murder. At the pub, Chas glances at Aaron when she learns Robert’s been arrested and Aaron thinks Andy’s worked it all out. Robert paces in his police cell, scared as the door opens. He’s taken to the interview room where he answers questions about his relationship with Katie and Andy. He lies that Andy made up the allegation because he’s never forgiven him but will he manage to manipulate the situation?

Rakesh tells Chrissie that Lachlan had a gun in the village but he doesn’t know where he is now. Chrissie’s stressed as she calls him. She begs Rakesh not to call the police, pleading for him to give her twenty minutes to find him. Will Lachlan return before Rakesh calls the police?

Debbie can’t resist when Ross kisses her but upset from seeing Andy and Robert fighting, Sarah, followed by Pete, runs in to see Debbie and Ross together. Angry, Pete leaves, warning Debbie against Ross. After comforting Sarah, Debbie postpones their night in and Ross leaves annoyed that Pete once again got in their way.

Filled with rage, Andy insists to Diane and Victoria that Robert killed Katie. Harriet comes clean to Ashley she knows about the surprise party he is throwing her. 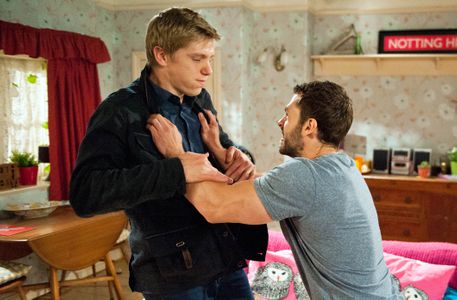