Kerry’s on a mission to prove to Bernice that a sexless marriage would be a very big mistake. But Bernice seems determined to continue with her wedding. Meanwhile, Lawrence is cajoled into going on a stag do with Jimmy and Rodney. Later when Kerry sees Andy she gets an idea. Soon a scantily clad Andy is jettisoned into Bernice’s environs as Kerry wants to show red hot Bernice what she will be missing if she signs up to a sexless marriage. But will seeing Andy half naked make Bernice see sense? Meanwhile the men are all drunk and Lawrence is ready for his wedding, believing he is the luckiest man alive. Andy asks Bernice if a no sex marriage is enough for her. Soon they are kissing passionately before Andy asks her if she wants to leave with him. A horrified Chrissie watches the pair leaving through a gap in the door.

Joanie is disappointed Zak hasn't changed his mind about her moving out and sad at his coldness towards her. Dan and Kerry are soon fighting her corner incredulous he’s kicked her out. Meanwhile, Zak is struggling with his true feelings for her. Later, when Cain goes to see Zak over the situation will Zak unburden and tell him the real reason he kicked Joanie out? When Joanie comes to collect her things she is surprised by Zak’s reaction...

Things are awkward with Chas when Diane returns from her holiday. Chas tells her Emma was behind the break in. They call a truce but it’s going to be a slow road for these friends. Meanwhile, James is out trying to track down Emma who has left the village to start afresh and is already working at another surgery. But can Emma forgive her family for their judgments and will she want to return the village after the accusations? Meanwhile, James wonders if they could have misjudged her after all.

Harriet’s uncertain when Ashley says he was confused and never wanted to break up with her. 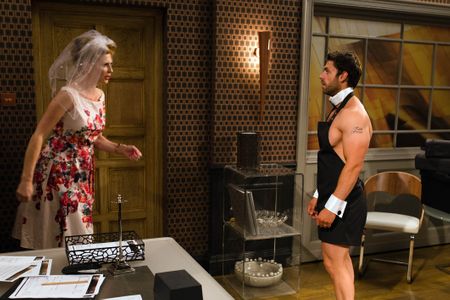