Paddy worries about Rhona seeing Pierce but she assures him it will be okay. Rhona meets Pierce and reads Tess’ messages from Paddy. It’s tricky reading as she struggles to contain her emotions and blurts out it was Paddy who Tess was having an affair with. Meanwhile, Paddy’s in the pub talking to Marlon when a fuming Pierce arrives and heads straight for Paddy and punches him, knocking him to the floor…

Nicola thinks she’s got one over on Charity as she hands her a copy of the fake accounts, but Charity smirks, in the know. Cain soon works out Ross and Charity are dodgy dealing together. Charity’s driver Jez arrives at Butler’s farm with all the items and Charity’s triumphant at the cash she’s making. But later when Charity goes to the farm she finds the barn empty, with Cain in wait. She has been caught. Cain warns her about working with Ross. Fuming, Charity heads to find Nicola and Jimmy and makes her demands.

Lisa insists to Zak she deserves a new life too. Later, Lisa is painting the house as Zak arrives. Pollard explains Val’s gravestone is coming tomorrow. Tracy has a plan and soon Pollard’s unimpressed when he’s called to the pub to discuss the ceremony for Val’s gravestone erection. 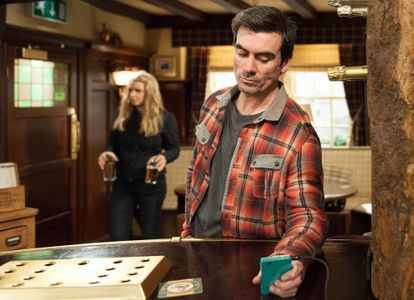