Emmerdale 23/5 - Tracey moves in with the girls

Chrissie’s delighted her divorce has come through but Lawrence is furious to find Ronnie at Home Farm. Bernice tells Ronnie to go and suggests they tell Chrissie about him, but Lawrence snaps at the idea. Lawrence is determined to sort things once and for all but begins to panic when Ronnie suggests he tell his family the truth…

Laurel tells Nicola it might be a good thing Ashley’s forgotten about the social worker’s visit. Doug sees his daughter is clearly struggling and decides to take matters into his own hands and decides Laurel’s having a night on the town with Nicola…

Vanessa is unimpressed when Carly suggests Tracy can move into the spare room. Carly apologises admitting she should have talked toVanessa first, but Vanessa concedes she needs livening up and Carly’s pleased to have got her on side.

Sam’s put out to see Jai’s flowers in the house. Megan tries to reassure him she’d never get back with Jai, but Sam’s clearly still worried.​​​ 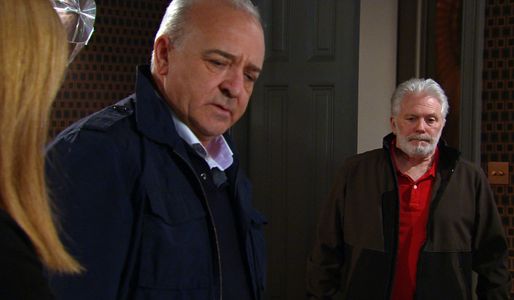