Emmerdale 23/8 - Can Cain Hold Back Any Longer?

Charity gets a lead about Belle’s whereabouts but she worries when she realises it’s in the red light district. Sam and Marlon follow her but they’re like fish out of water and Charity soon sends them packing. Charity finds the address of her lead but is shocked to see Holly’s ex-boyfriend, Dean. He threatens her with a bat and with no way out, she hides in the bathroom. Desperate Charity calls Cain but he thinks it’s just another one of her lies. However, he soon realises she’s in trouble when Sam comes clean. AtDean’s, Cain finds a battered and bruised Charity. He wants to take her to A&E but she insists she just needs a whisky. He comforts her and she leans in for a kiss. Can Cain holdback any longer?

David’s disappointed when Tracy misses his plane-writing proposal. Tracy’s on the phone to her Dad’s nurse but Vanessa overhears her on the phone and thinks she’s cheating on David. Leyla tells David what Vanessa heard but she soon feels bad when David fills her in on Tracy’s dad. It’s not long before they put the pieces together and realiseVanessa and Tracy share the same father but how will the girls feel when Vanessa turns up at the hospital and Frank has no choice but to confess all?

Chrissie’s reluctant to honour her deal with Rakesh, suspecting they can’t trust him. And Rakesh worries he’s been sussed. Brenda warns Bob to make up with Carly and Marlon. He apologises, although he clearly still has reservations. Liv’s worried she’s going to be kicked out but Aaron reassures her she’s going nowhere.​​ 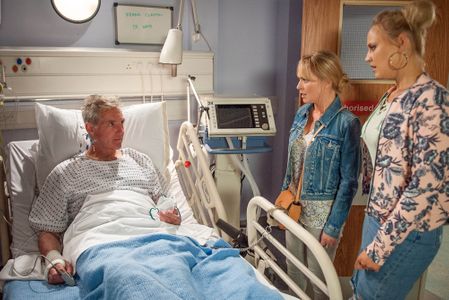