Emmerdale 24/03 – Will Marlon stand by his choice?

As Donna prepares to leave the village, Laurel makes one last attempt to persuade Marlon to be part of his daughter’s life. Rhona thinks Leo should know his sister, taking him to meet April, and Marlon is annoyed when he sees them together. Donna pleads with Marlon not to take his feelings out on his daughter – will he change his mind, or let his daughter go?

Moira questions what Pete gets up to at night and he’s forced to admit he’s in a relationship with Debbie. Moira worries about the fall out. Chas tells Debbie she can’t let what happened with Cameron ruin her life, and Ross takes the opportunity to mess with things, telling Debbie that Pete has been mouthing off about their relationship.

Charity reassures Jimmy the business situation is her problem and ends up shredding all the paperwork, to Megan’s frustration. Later, Jai asks whether Charity has signed the agreement but Megan cuts him off, knowing that Declan is watching.
​
Ruby and Ali are upset when the bank turns them down. Jacob’s pleased when Alicia and David let him run a delivery service, and soon enough Jacob is offering Noah a job too. 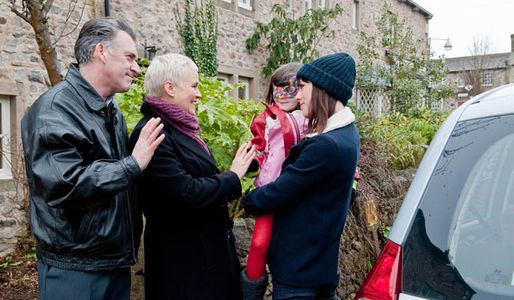 Emmerdale 21/03 – Is Marlon about to make a huge mistake?

Emmerdale 24/03 - Will Jimmy and Nicole make it to Dubai?