Pete watches from across the street as James and Emma set off to identify Ross’ body. At the mortuary a nervous Emma and James are shown into a waiting room. Meanwhile, Pete tells Finn he should prepare himself for the worst. They try to ring Pete but he doesn’t answer his phone. Meanwhile, Pete is crippled with fear, as he knows the discovery of Ross’ body will bring the police to his front door. Will Pete’s fear cause him to make a confession? Moments later Pete drops his bombshell - he killed Ross.

Zak’s worries over Sam and Rachel’s relationship are piqued when he sees them rowing when the car breaks down. When Zak tries to raise the matter with Rachel she reacts badly and soon Sam is under pressure to tell Zak and Lisa they won’t be welcome at Ruby’s funeral. When Zak hears of this, he’s more worried than ever about Sam and Rachel.

Ashley and Diane are finding it hard to get Pollard to open up and discuss Val’s funeral arrangements so Diane uses underhand methods to find out what they are.

Ali is back in the village for Ruby’s funeral, Dan explains exactly what happened but it’s clear he’s still suffering. Priya is unimpressed when Rakesh tells her what Jimmy wants. Emma and James give into their passion. 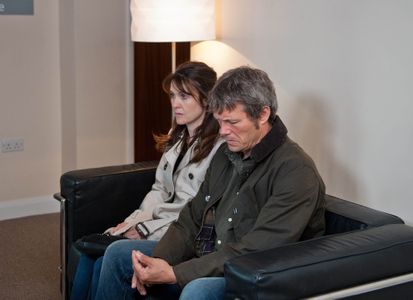