. Chrissie puts on a brave face after the robbery but Robert feels guilty over her mum’s stolen ring. Meanwhile, Aaron's relieved to learn Ross hasn't yet sold the jewellery but simmers when Ross is adamant Chrissie is not getting it back. Later, Aaron takes matters in his own hands and when Ross learns what he has done, is incredulous, suggesting perhaps he fancies Robert to go to such lengths.

Laurel is fed-up over Marlon’s concern for April and things reach a head when she breaks down in tears at work. Later, Marlon's speechless when a ruthless Nicola confronts him, slyly pocketing his phone as she goes. Is Nicola going to meddle further?

Victoria sympathises with Andy as he looks at the cost of solicitor fees, annoyed he’s not going to see Robert. Andy relents telling Robert about wanting to go for custody. How will Robert react when Andy asks for some leeway with the rent?

Nicola decides to take the PA job. Katie's incredulous Leyla is charging more for wedding services due to the extra rent. Chas is gobsmacked Andy is fighting for custody and of Pete's drug charge. 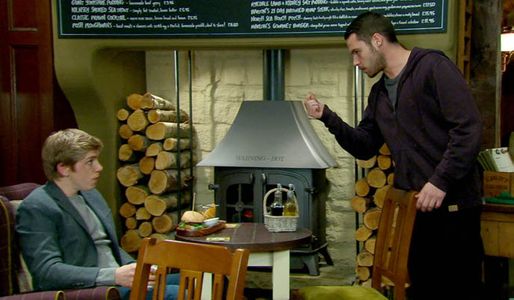