Trouble follows Zak and Joanie when her boss Steve turns up at the Dingles demanding money for what they stole. Later, Zak reassures Joanie he has set Cain on the man. Meanwhile, Belle gets a shock when she walks in to witness her dad and Joanie kissing. She runs off, mortified by what she’s secretly seen. She tells Lachlan about it, insisting Joanie will pay for her mistake. How will Belle hit back at Joanie and could it backfire?

Aaron freezes when the warehouse robbery comes on the news and has to cover that his pile of cash is from the scrapyard. Chas ropes him into coming to the nativity but he’s shaken to see an image of himself in the paper. Later, Chas is floored when Gordon shows her the article and she refuses to believe it’s her son. During the nativity, DS Hart arrives, wanting to talk to Aaron about the warehouse robbery. Will he get out of this situation before Christmas?
Will Laurel and Ashley regret not telling the kids sooner when Arthur overhears a conversation? Laurel has a special Christmas present to help capture the memories. Leyla and Nikhil want to help David get the ring back whilst Pollard shows no sign of lightening up. Meanwhile, Lachlan tries to return the ring but could his efforts backfire? Vanessa is touched by Leyla and Carly’s plans to help with Johnny’s first night home. 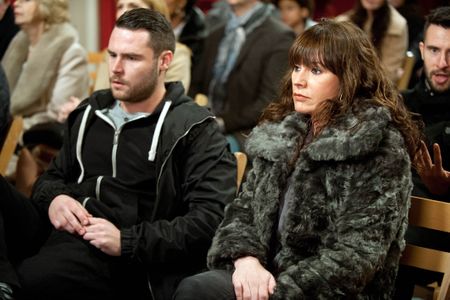