Moira insists Charity moves out today, Charity pleads with Cain but is thrown when he agrees with Moira. Cain is like a bear with a sore head and later Charity is intrigued to overhear his conversation with PC Swirling, who arrives to speak with Cain concerning his missing car. Charity is confused about Cain’s story and wonders what is rattling Cain.

Kerry finds a sobbing Bernice who admits she can't do Katie's hair and make-up for her wedding, as she still loves Andy. And Bernice’s day gets worse when she is forced to cover the bar during Andy's stag do. The stags gather in fancy dress in the Woolpack. Soon Robert arrives and Andy reluctantly agrees he can stay, leaving Victoria hopeful. But the brothers do not remain amicable for long. Later, they argue and have a fight over Jack and Sarah’s graves. Will Robert do as Andy says and stay away from the wedding? Meanwhile, Katie’s hen do is a low-key affair but Leyla and Kerry have plans to address that. Katie tells her friends she and Andy are closer than ever and no one can touch them...

Belle joins Lachlan in the village and he offers her a birthday present if she meets him later. Later in a barn Lachlan offers Belle a legal high, promising it will help her relax and forget about Gemma. Belle is nervous questioning if it is safe but will she be tempted?

Aaron's thrown when Adam reveals Robert as the potential investor but is unable to let on the real reason for his trepidation. Vanessa and Moira make up and Vanessa reveals her concerns over Kirin. 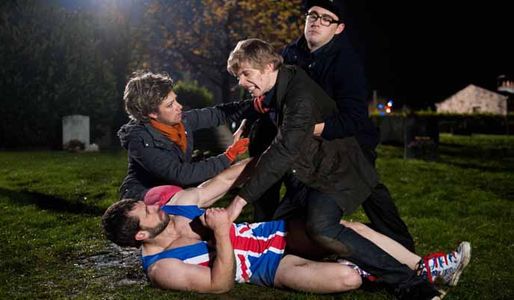