Nicola’s the talk of the village and quick to tackle the gossip head on. Meanwhile Rodney warns Jimmy if he doesn’t do something nice for Nicola he’ll lose her. Over at Home Farm, Lawrence asks Nicola to cancel his Dubai trip but when David arrives Nicola confronts him over his accusations. Later, in the Woolpack, Rodney suggests to Nicola she let Jimmy make it up to her and to everyone’s surprise Jimmy suddenly walks into the pub, dressed as Tom Cruise in the film Top Gun and serenades Nicola. But will it work?

Chrissie is worried when she finds a scarf in Lachlan’s bag and he covers as to who it’s for. Nicola sees Lachlan as he opens a bag containing an expensive ladies handbag and confronts him believing it is Chrissie’s but Lachlan is defensive. Later, after Alicia has seen the bag left for her, David decides to tackle the issue and heads to Home Farm to confront Lachlan. Back at the shop, David explains to Alicia it was Lachlan who bought her the bag and he has a crush on her. Alicia’s dismayed when she learns David’s warned him off as he’s only a kid. Alicia goes to see Lachlan but is thrown when Chrissie asks if she knows anything about Lachlan’s mystery girlfriend. Alicia kindly returns the bag telling him it wouldn’t be fair of her to keep it. Unaware how Lachlan is now feeling. Meanwhile, Chrissie tells Robert about the scarf and Robert tries to reassure her but she is still uneasy…

Cain lies to Moira when he take Noah to visit Charity in prison. But it is clear Cain is dreading seeing her, worried over her feelings for him. Later, in the prison, Noah’s pleased to see Charity and Cain is about to leave them to it but Charity pleads for him to stay, clearly relieved to see him. Charity sends Noah off to a vending machine, giving her an opportunity to talk to Cain alone but will she still feel the same as she did before?

Rachel breaks the news she’s got a job in Luton, her sister Ali is upset Rachel is going again.. Rodney’s pleasantly surprised with Georgia’s reaction to him having dumped her. 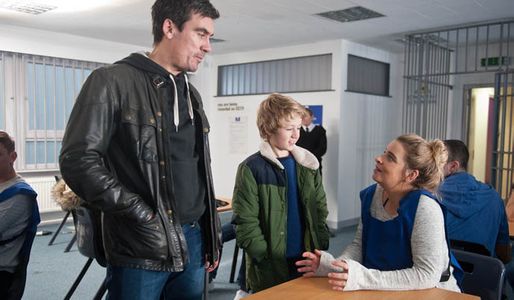