Emmerdale 25/05 - Not quite a win win situation

Debbie explains to Pete and Finn that Ross, who is about to fight, is in trouble, urging them to help her find him. They soon find Ross at the venue preparing for his big fight, seemingly determined to go ahead. Debbie and Cain are shocked to learn Zak's pawned all Lisa's jewellery to bet on Ross winning the fight. As the fight ensues it makes for uncomfortable viewing, but when Debbie witnesses an exchange between Ross and Charlie she realises there's more riding on this than meets the eye. Will Debbie get through to Ross? And what will Pete make of Debbie’s over concern for his brother? Later, Charlie's bouncers sweep Ross away and soon after gun shots are heard…

It’s Betty’s “Going Away” party and the pub is decked out especially for her but everybody is worried, as Betty has gone AWOL. Concerns grow that perhaps her new mystery fancy man might be out to get her money. They are worried she hasn’t known her new man long enough. Eventually, Laurel finds Betty and the pair share some heartfelt words. Everyone heads outside the pub as Betty returns to say her goodbyes. In true Betty style, she bids farewell to the village, leaving her friends and family gob smacked as she is driven away in an enormous limousine.

Bob gives Brenda the silent treatment over both Carly and the shop and Brenda’s worried she's overstepped the mark. Later Bob gives Carly hope suggesting he could invest. Carly is dubious, knowing Brenda will not be keen. Will Bob find a way to get around the Brenda hurdle?

Adam tells Victoria he wants to move in with her and they make up their differences. Laurel's been to her first AA meeting and is grateful for Ashley's support. Harriet agrees to Laurel staying until she finds somewhere else. Laurel hides her upset when a scared Arthur hurries away after seeing her. 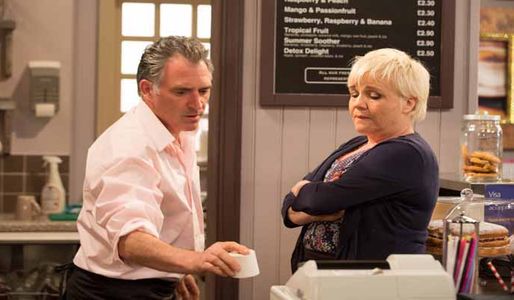