As Victoria and Adam get ready for their wedding, both try hard not to think about the impending court case. A riled Robert fills Chrissie in on Victoria and Adam’s plan, determined to stop the nuptials and sets off with purpose to the address Cain gave him. At the registry office, Aaron arrives and encourages a worried Adam not to worry and to just focus on himself and Victoria. Victoria arrives at her wedding accompanied by Finn. It’s all smiles for the intimate wedding party and the service begins. But the besotted pair and their two guests are soon distracted by a noise outside. Will an uninvited arrival halt proceedings?

Priya is determined for Rakesh to tell Kirin the truth himself. But later when she tells a big lie all of her own, will it change her stance?

The Dingle’s name Charity’s baby ‘Moses’. Leyla’s confused to learn Alicia tried to apologise before leaving and the sisters clear the air. Alicia jokes to Leyla to make sure David gets on the next flight, but is Alicia more worried than she is letting on? Ashley worries for Victoria’s future ahead of the court case. On hearing she has ‘gone AWOL’, Ashley remains confident Victoria will show up. It’s clear David is struggling with the distance from Amba, his friends and family in the village.

Later, Chrissie’s thrown to learn Cain has beaten up Robert over their kiss. She tries to comfort him but he rushes out at the mention of Victoria’s wedding. Robert arrives at the Woolpack set to disrupt the gathering. Later Aaron makes a big admission to Cain.

In the court corridor Adam suggests admitting to destroying the car but Victoria refuses. Ashley’s taken aback by Victoria’s remorse as she apologises for the accident. Victoria warns Adam to keep quiet as she is led into court, but Adam is still determined to save her. Will Adam take the blame for Victoria? Or will a different series of events see Victoria escape sentencing?

Jai nearly causes an accident when he pulls out in front of Debbie’s car. He taunts Debbie over being left stuck holding Charity’s baby. Debbie drives off and Leyla reveals herself hidden in the back of Jai’s car, the affair clearly still on. Afterwards, Ross grows concerned for Debbie when he overhears her telling Chas how Jai spoke to her earlier. That afternoon, Ross heads to the factory and watches Jai. What is Ross up to?

Rakesh anonymously puts £10k through Vanessa’s letterbox to help with the baby. 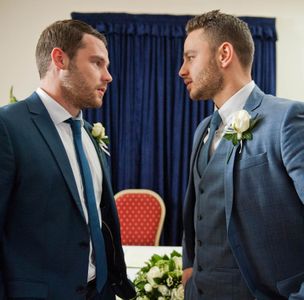