Debbie slaps Cameron after his revelation, before he tries to prove how much he loves her and give her a full account of events. Meanwhile, Gennie is stunned and wants to escape.

Cameron blocks Debbie from leaving and she starts to panic - she knows now what he is capable of. Andy knocks on the door but Cameron doesn't let Debbie call out, so he leaves, believing she's out.

Elsewhere, Rhona, Vanessa and Moira are all having a relaxed drink, but the atmosphere changes when Moira brings up the subject of Vanessa's druggy friend. Rhona's furious at the betrayal.

Also, Dan confronts Kerry about stealing the money and a row breaks out.

Debbie and Cameron are making their way to break news to Debbie when they spot a panicked Gennie leaving the house. They chase after her and after a stand-off in the garage Gennie revs her car and escapes, with Debbie and Cameron behind.

Gennie is panicking and loses control of the car, screaming as it careers off the road and tumbles down the ravine. Debbie calls an ambulance as Gennie's car lays crumpled…

Elsewhere, Val tucks into the celebratory champagne, but Nikhil is worried Gennie has cold feet because she hasn't shown up. He tries calling her again but just gets her voicemail.

Also, Sean feels terrible when Kerry starts to pack her bags. He decides to tell Dan the truth. 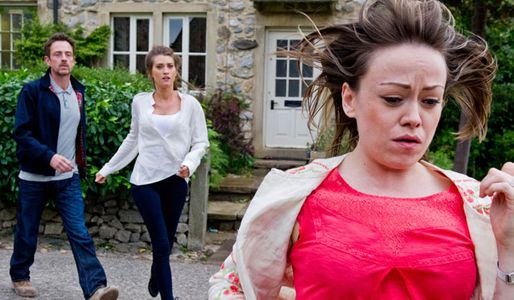