The police search for missing April continues and Marlon is fraught with worry. Later, Ross finds April hiding in one of the cars at the garage. He tries to coax her out of a locked car but is clearly out of his depth and struggles with his own emotions when she talks about her mum as though she were still alive. Meanwhile the Police urge conflicted Marlon and Laurel to make a statement to the press. Running out of options, Marlon is ready to come clean to the police about everything, worrying April could have been taken by any one of Gary’s dodgy contacts. Will Ross arrive with April in the nick of time?

With the heavy police presence in the village, Chas worries for Aaron. Later, she is reassured when the police inform her that Aaron has been sighted down South, the plan seemingly working. Paddy notes Edna’s curiosity in Aaron and realises it was her who shopped him. In his frustration will Paddy blurt out Aaron’s secret?

Marlon suggests to Laurel that they go ahead with the wedding to take April’s mind off things. Vanessa throws caution to the wind as she agrees to have a relationship with Kirin providing they keep it a secret. After building bridges with his dad, Finn wonders if he should come clean to him about his search for his mum. 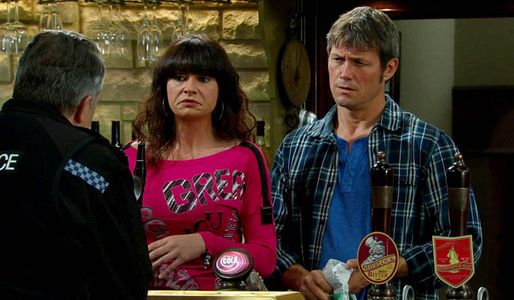