Aaron's shocked to realise he's made Robert doubt him and Robert thinks he's lost Aaron as he walks away. Chas is heartbroken when Gordon dumps her, telling her he can't break up a mother and son.

​Kirin’s stressed at having to juggle work and a baby and is slumped over his desk when the businessmen arrive. They aren't impressed as one of them mentions his drugs possession charge. Can Kirin cope with being a dad and a businessman?

Ross is winded to see the finality of Debbie's disappearance as Cain gives Laurel the keys to Mulberry. Ross secretly grabs Cain's phone and finally gets through to Debbie but when Cain finds him talking to his daughter, how will he react?

David asks Leyla to look after Jacob whilst he goes to Portugal to sort things with Alicia. Nikhil's pleased she'll be moving into Farrer's but Jai's not happy when he hears the news. Carly's keen to get rid of the stolen wine quickly and gets the perfect opportunity when David asks her to look after the shop. 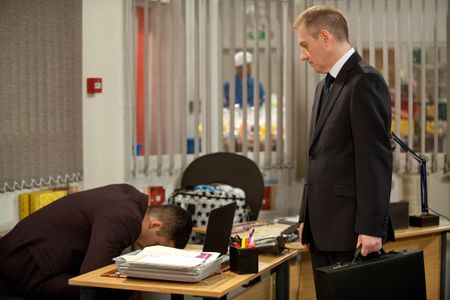