Rebecca begs Lachlan not to tell Chrissie about her affair with Robert. And soon Lachlan is reassured Rebecca is being genuine. Later Rebecca probes Chrissie about Lawrence, giving her a last chance to come clean about not being his daughter, but when Chrissie fails to come clean Rebecca rips upher card. Lachlan spots the ripped card and realises Rebecca isn’t as genuine as she seems. Just as Chrissie gives Rebecca her present Lachlan publicly tells his Mum she was sleeping with Robert. Chrissie and Rebecca fight and as they argue, Rebecca points out they aren’t really sisters. Chrissie alarmed the secret is out and panics for her future. Later,Chrissie fills in Lachlan on the danger to their inheritance and plots on how to defeat her sister Rebecca.

Chas asks after Moira. Charity brushes off Noah’s complaints and Cain’s stopped in his tracks when the police arrive to question him. Moira starts to defend Cain but does he already have an alibi? Liv comforts Noah about having a difficult mother. With the police gone Cain thanks Moira for sticking up for him but she tells him to hurry up and go. He realises there’s nothing between them now. Later in the back room at the Woolpack, Cain suggests to Charity they leave for France early. Charity is surprised but pleased.

Frank offers to look after Johnny while Vanessa sees to an emergency. Soon Frank has arranged a playdate for him and Johnny with Megan and Eliza.​​ 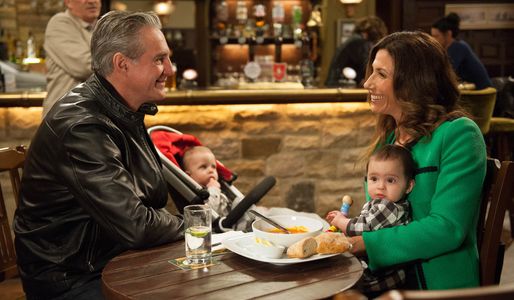