Chrissie's rattled when Cain warns her about letting Lachlan go near Belle. Chrissie later finds Lachlan skipping school and tells him about Cain's warning, worrying he's doing the same as he did before. Chrissie's unconvinced as Lachlan reassures her. At the playground, Lachlan joins Belle as she sits alone, and things seem okay until out of the blue Belle lashes out hitting him before rushing off. A glowering Lachlan watches her leave.

Marlon and Laurel are excited but nervous ahead of their date. They enter the B&B and Finn offers to show them to their bedroom. However, when a large group arrives, their plans are soon derailed.

Andy feels betrayed when Moira tells him there's no work for him at the farm, given how things are between him, Debbie and Pete. Later, Moira tries to reassure Pete as he worries how this could impact on Debbie’s custody case. Moira and Cain worry when DI Bails arrives to arrest Pete for manslaughter.

Nicola's grovels to Robert for her job. Lawrence admits to Robert he was wrong about him and Robert tells Lawrence how Andy wants Wylie's Farm rent-free. Harriet blackmails Katie into helping for the craft fair. Pollard’s annoyed when Aaron gives Chrissie special treatment. 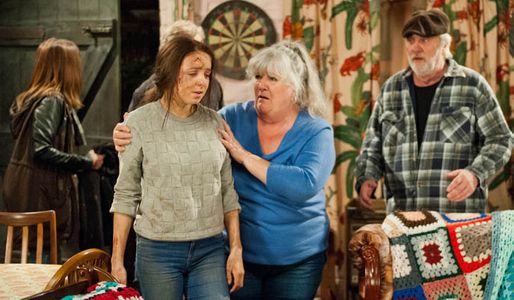